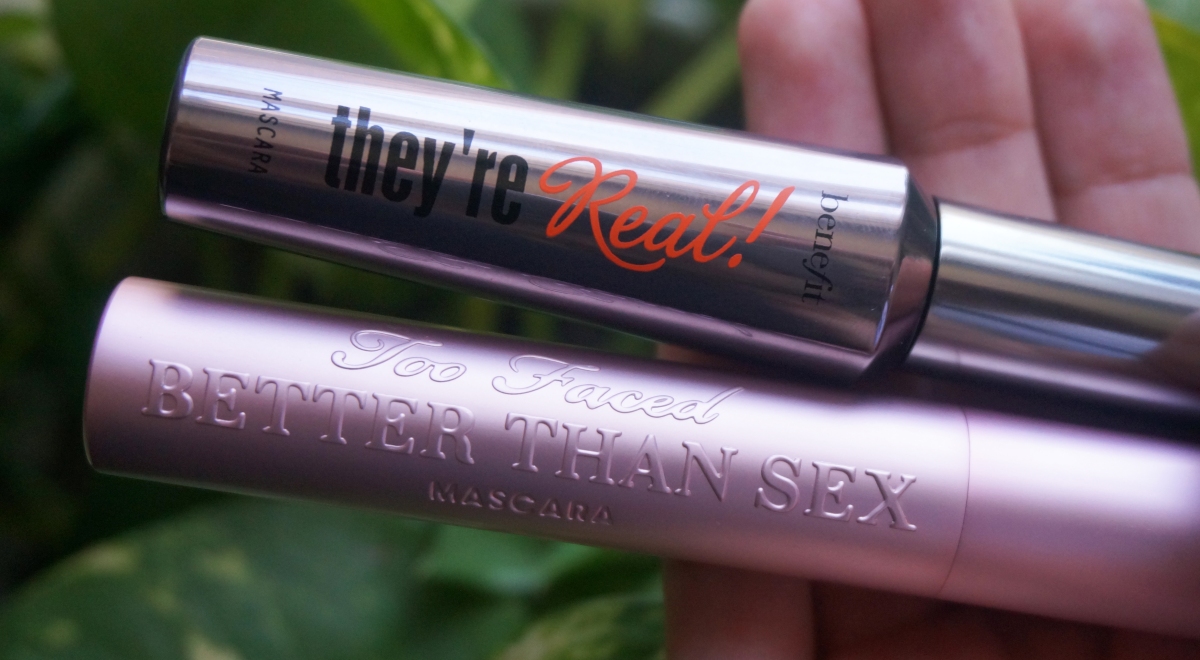 If you’re dropping a little more cash for a high-end mascara, you might as well get the best of the best, right? If you ask any beauty aficionado which high-end mascara is their go-to, it’s probably one of these two cult favorites: Better Than Sex by Too Faced® or They’re Real! by Benefit Cosmetics®. These two mascaras have been competing for the top spot for quite some time now. But for all my high-end mascara virgins, like me, the big question is: Which mascara is the best? Lets put them to the test and find out.

There are five things I look for when trying out a new mascara: Is it easy to use? Does it make my lashes clumpy? Does it make my lashes look longer? Does it give the illusion of thicker lashes? And, does it smudge throughout the day? For this experiment, I applied Better Than Sex to one eye and applied They’re Real! to the other, and compared the two (for the integrity of this experiment, I used the original versions of each of these products (even though I usually opt for waterproof options). Let’s get into the nitty-gritty:

How easy a mascara applies has a lot to do with the brush itself, and one brush was a little friendlier to use than the other. They’re Real!’s brush is super flexible and has little bristles on the top of the brush that makes applying the inner and bottom lashes very easy — definitely something for beginners to consider. The Better Than Sex mascara has a rounded, voluptuous brush that worked wonders on my top lashes, but was a little hard to use on my bottom lashes due to its larger size.

Safe to say, neither of these options made my eyelashes clumpy. Phew! Both formulas are lightweight and apply smoothly — no complaints here.

Both brands gave my lashes some serious length — longer than any other mascara I’ve used in the past. These two products seem to be neck and neck in this category.

I’ve always struggled with thin eyelashes. So if a mascara can create the illusion of thicker, fuller lashes, that’s always a plus in my book. Better Than Sex did a better job of filling out my lashes and making it seem like I had more lashes than I actually did — major brownie points here!

As someone who has oily eyelids, a huge deal breaker for me is if a product smudges or smears throughout the day — no one likes dealing with runny mascara. To determine how strong these mascara’s lasting powers are, I wore them all day long and reported back on how well they stayed put. After a long day of running errands and catching up with a friend, I checked back in with my lashes and it was evident that one mascara had out-shined the other. They’re Real! didn’t have any visible residue — honestly, I’m shook! On the other hand, Better Than Sex had just a tiny bit of fallout — not a huge deal, but it was still noticeable. Had I opted for their waterproof option, this may have been a different story.

So, which one reigns supreme? Since both products excelled in different categories, it’s hard to declare one as the winner. When it comes down to it, the best product really depends on your personal preference. If you’re looking for a mascara that won’t smudge, then They’re Real! is your best bet. But if you care more about fuller looking lashes, then Better Than Sex is the one for you.

Since I struggle with thin lashes and oily lids, the most fitting option for me is the Better Than Sex waterproof mascara — this formula gives me the best of both worlds!

These are both mascaras worth investing in, but to say which one is ‘better’ is completely up to you.

Which team are you — team Better Than Sex or team They’re Real!? Let me know in the comments below!